More Americans can carry guns in more places than ever before. In the majority of states, law-abiding gun owners can walk into bars, restaurants and churches with their guns without fear of legal ramifications, a News 21 review of all 50 states found.

Number of states that prohibited concealed carry in 1981: 19

States that prohibit it today: 0

Number of states that do not require a concealed carry permit: 5
An open-carry permit : 25

“It’s a situation just like getting up in the morning and putting your shoes on or your boots on. For me it’s putting (my gun) onto my side,” said Lee Bird, owner of Twin Birds Saddlery in Wickenburg, Arizona, 60 miles northwest of Phoenix. Bird openly carries a .38 Smith & Wesson Special revolver on his hip everyday.

“People look at you, but I ignore it,” Bird said. “I’m not carrying it for attention. I’m carrying it because I want people to know that if there is an incident somewhere, that I am there to defend myself or my family.”

Although Bird prefers to openly carry, sometimes he keeps his gun concealed in his briefcase or pocket. Arizona has some of the strongest gun rights laws in the country. It is one of seven states that do not require gun owners to get a permit to carry a concealed gun.

Thirty years ago, Bird wouldn’t have been able to carry his gun concealed at all. Historically many states heavily restricted who could own a handgun or banned the concealed carry of handguns altogether.

“People have come to think of the Second Amendment as protecting the individual right to keep and bear arms,” said Joseph Blocher, a law professor at Duke University specializing in constitutional law. “Also, I think people have come to oppose strong handgun laws and things like that which have in the past found favor.”

Number of states that allow concealed carry in churches: 25

Number of states that ban concealed carry in bars: 16

Georgia’s Legislature recently passed the Georgia Safe Carry Protection Act, which significantly expanded where gun owners could take their firearms. It allows licensed gun owners to bring their firearms in to churches, schools, bars and restaurants. Critics of the bill have called it the “Guns Everywhere Bill.”

“I open my front door and walk in public spaces in Georgia,” said Kathryn Grant, co-founder of the Georgia Gun Sense Coalition. “Most people don’t think about the potential of violence erupting because it’s not a reference point, it’s not a part of their experience yet.”

For some, the acceptability of guns and the number of people who could potentially be carrying is terrifying.

“If I thought about the possibility of the increased number of guns now that are being carried in places, it would have a paralyzing effect, and I won’t let that happen,” Grant said.

But Georgia Carry, an influential gun-rights group, pushed the Safe Carry Protection Act through the Legislature to reinforce its members’ Second Amendment rights.

“If the criminal isn’t going to abide by the law, then I should have more places to carry,” Georgia Carry Executive Director Jerry Henry said. “Or it’s the responsibility of the place that denies my right to carry to protect me.”

Georgia Carry aims to educate the public about gun owners’ carry rights in the state and to ensure that people understand that guns are an acceptable part of society, Henry said.

The expansion of gun rights into the public sphere is a relatively new phenomenon, although not unique to Georgia.

In the 1960s, legislators responded to race riots and rising violent crime by passing restrictive gun laws. However, recent gun violence has spurred legislators in some states to strip away restrictions on where people can carry guns outside the home.

“It’s now just a sort of empirical social fact in most of this country that when you go to the shopping mall or the ballet or wherever, some of the people in the crowd of the few thousand around you, there’s going to be a percentage carrying guns,” said Dave Kopel, adjunct law professor at Denver University who specializes in Second Amendment law.

Blood-alcohol content under which an individual in Nevada can legally drive a car: 0.08

Number of drunken-driving-related deaths in Nevada in 2011: 70

“The best states have strong permitting standards to make sure that people who have a history of alcohol abuse or of violent arrests are not carrying guns in public,” said Brina Milikowsky, a spokeswoman at Everytown for Gun Safety.

Gun owners making legal purchases are required to pass a federal background-check and in most states must meet certain standards to obtain carry permits, such as age and training.

“I have been through all the safety courses that are necessary,” said Bird, who calls himself a “middle-of-the-road” gun owner. He has no problem with background checks and gun laws for legitimate gun buyers, as long as they are not too restrictive, he said. Bird grew up hunting and target-shooting with his father and has been using guns since he was 4.

Gun laws regulating where people could carry used to fall along rural and urban boundaries. But the advent of pre-emption laws, which prevent municipalities from passing their own firearms ordinances, has polarized the issue of public carry.

States began passing firearms preemption laws in the 1980s. Prior to that it was illegal to carry a gun inside city limits in many places.

“You could have one outside because it was more rural, not as much of a police presence so you might need one to defend yourself,” said Blocher, the Duke law professor. “But in the city, people drew a different public-safety balance. That has changed a lot, especially in the last 30 years.” 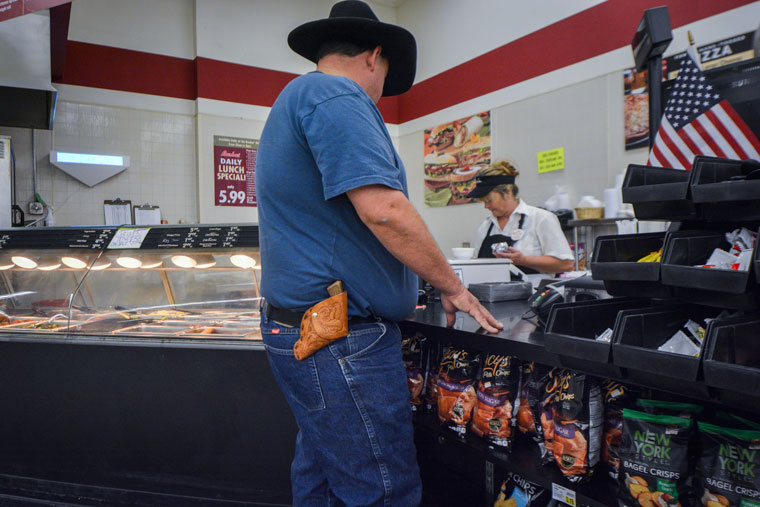 Lee Bird carries his .38-caliber pistol on his hip everywhere he goes. That includes his local grocery store in Wickenburg, Ariz. Photo by Jacob Byk/News21.

In the majority of states, the cities and counties cannot make their own firearms ordinances but must abide by state law. However, pre-emption laws are not uniform across the country, and in some states, municipalities may have more-stringent firearm controls than the state.

Age that a person can purchase a shotgun or handgun in Vermont: 16

Number of firearm homicides in Vermont in 2012: 3

“We’re a country that has more access to guns than any industrialized country,” said Grant, from the Georgia Gun Sense Coalition. “It’s important to stop this epidemic of gun violence. As a public safety issue it’s incredibly important.”

“All of the legislation points to more guns in more spaces being a good idea,” Grant said. “The research isn’t out there. It’s fundamentally flawed logic.”

Laura Cutilletta, senior staff attorney for the Law Center to Prevent Gun Violence, says that open carry can still be jarring to some.

“The public tends to not like seeing people carrying guns openly in public places and they call the police, usually not realizing that it’s actually legal in most places,” Cutilletta said. “If they knew that people were carrying and they just can’t see it, they would be equally disturbed by that.”

The majority of gun owners have guns for personal safety, not to make a political statement, surveys have found. Despite the increased attention on open-carry rallies at state capitals or chain stores like Target, only 5 percent of gun owners said they carry to reaffirm their Second Amendment right, according to a 2013 Gallup poll.

“In my lifetime, I hope I never have to draw down on a person,” Bird said. “It’s there for my protection. If I need it, it’s a tool and that’s all it’s used for.” 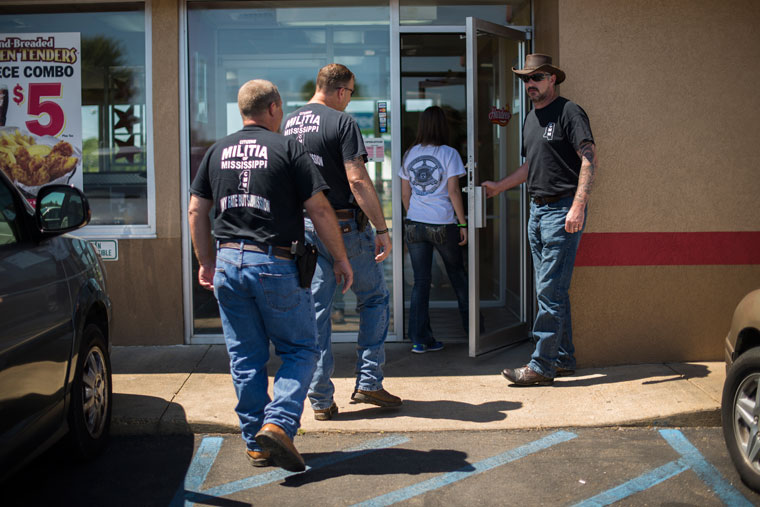 “Our goal is to spread that awareness and show people not only what they’re legally able to do and how to do it safely, but also to show them that good guys have guns, too,” Pucillo said. “So it’s not just the bad guys, like they see in movies.”