Fear of the federal government’s interference with Second Amendment rights and suspicion that elected officials are ignoring the “will of the people” have provoked a resurgence of self-described patriots across the country who say they are preparing to defend themselves and their rights by any means necessary.

Organizations tracking the movement say the number of groups has risen dramatically in the past six years.

“There’s a very unreasonable, ridiculously crazy attack on the Second Amendment and people that own guns,” said Cope Reynolds, a member of the White Mountain Militia in Show Low, Arizona. “If everything were not protected by the Second Amendment, the government would have the opportunity, if they so desired, to go unchecked with impunity and do whatever they want to do.”

Reynolds is the operations manager of Shots Ranch, a tactical shooting range and survival training facility in Kingman, Arizona. He considers this type of training to be necessary preparation for a time in America he sees as inevitable.

“We want people to be able to provide for themselves in a world where we might not be able to just run down to Wal-Mart at any time,” Reynolds said. “We think that at some point in America we’re probably going to experience those times and a lot of us think it’s not going to be far away.”

For individuals like Reynolds, the Second Amendment is an important check on the government and is needed to protect the Constitution.

“It’s the beauty and the danger of America’s Constitution,” said Adam Winkler, a law professor at the University of California, Los Angeles, and a Second Amendment expert. “Its great generalities are so vague that anyone can interpret them in light of their own experience and their own interests. And indeed, the Second Amendment is one of the most confusing textual provisions of the Constitution.”

In 2008, the U.S. Supreme Court ruled in District of Columbia v. Heller that the Second Amendment protects an individual right to own a firearm for traditionally lawful purposes like self-defense.

“It has certainly given fuel to gun rights proponents and to gun culture,” said Robert Spitzer, a political scientist, author and professor at State University of New York Cortland who specializes in gun issues. “It fortified, in a very specific way, the very idea that there is in law something called gun rights.”

The 2008 ruling held that the individual right to own a firearm is “unconnected with service in a militia.”

“There certainly is a belief, and it’s a long-standing belief, that somehow average citizens owning guns will somehow have a beneficial or therapeutic effect on government behavior,” Spitzer said. “It’s rooted in anti-government sentiment, which has a very long history in the U.S.” 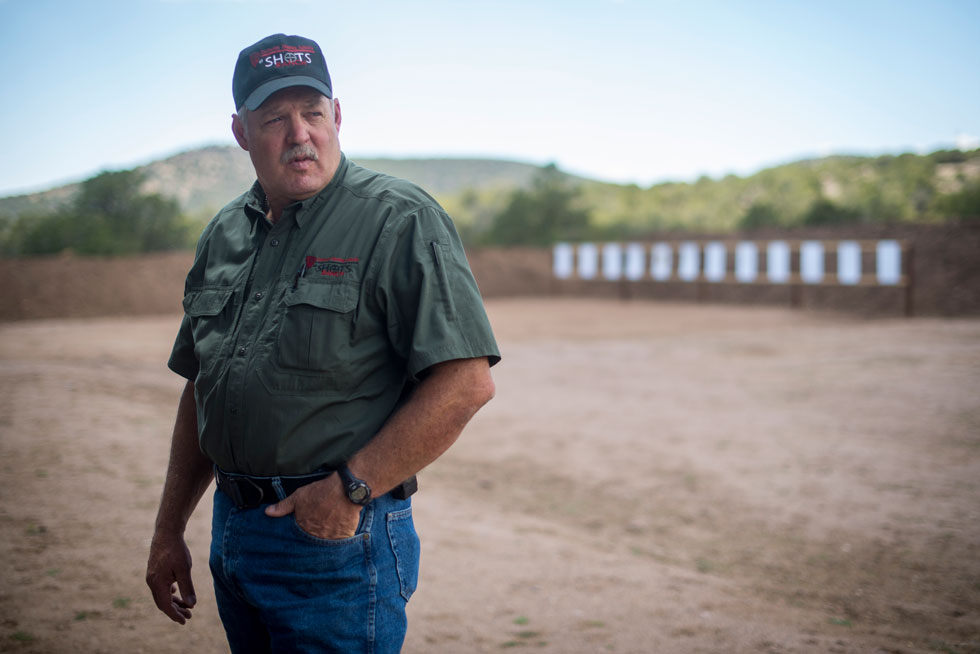 “We’re not anti-government. We’re anti-corruption in government. There’s a huge difference,” he said. “We cannot survive without government. We would turn into probably one of the most savage nations on the planet with no government at all.”

The Southern Poverty Law Center identified 1,096 “anti-government” patriot groups in the U.S. in its 2013 Intelligence report, an increase from about 150 groups in 2008. Considered part of this movement are 240 militia groups, which the center says have made a resurgence since their earlier popularity in the mid-1990s.

Mark Pitcavage, director of investigative research for the Anti-Defamation League, also has been studying the militia movement for the past 20 years and says the numbers are higher. The ADL keeps an internal list of militia groups, but does not publish it.

“We were tracking around 50 active militia groups in 2008 and now we’re tracking between 250 and 300 active militia groups,” he said. “It certainly represents a serious surge, which we’re able to confirm through the presence of groups and individuals on social networking sites, the number of militia-related events and trainings that we count each year.”

Pitcavage said the last militia movement was sparked in part by events in Ruby Ridge, Idaho and Waco, Texas, sieges that tuned in to deadly standoffs with federal agencies. He noted a similarity between these events and the standoff between Cliven Bundy and the Bureau of Land Management earlier this year in Bunkerville, Nevada.

Bundy had been in a disagreement with the government over more than $1 million in grazing fees and fines owed to the federal government. When the BLM came to seize his cattle in April, many militia groups and other members of the patriot movement joined his resistance, aiming their weapons at federal officers until the BLM withdrew.

“Here’s someone involved with conflict with the government and the government shows up at his ranch and starts taking his cattle that have been illegally grazing off the property,” Pitcavage said. “That’s tailor made for the militia movement.”

Modern private militias are unregulated by the government. Members of the movement say they feel disenfranchised and believe their conservative ideals are at odds with the current administration.

They say that arming themselves and training with other like-minded people gives them a sense of preparedness in an unstable world.

“When I was my kids’ age, we never locked the door on our cars, on our houses,” said Robert Mitchell, commander of the Citizens Militia of Mississippi. “That doesn’t exist anymore. Maybe it sounds cliche, maybe it sounds like Mayberry. I don’t know, but that’s the way the world’s supposed to be. And we have a strong desire to see our communities at least return to that.”

A little over a year ago, Mitchell started the Citizens Militia of Mississippi, which now claims nearly 150 official members — a number that members believe would probably be higher if not for the word “militia” in their name. They acknowledged a stigma surrounding the word, and said part of their mission is to help remove the negative connotation.

“Our goal is to change the public opinion of what the militia is,” Kevan Owen, commander of the northeast chapter of CMM, said. “We’re not a bunch of guys running around the woods, pretending to shoot bad guys.”

CMM, which formed in 2013, was not included on the list of anti-government patriot groups published this July by the SPLC. It is one of the newest groups to emerge in the last few years to call itself a militia. Members cite a concern about the current state of our country and a need to defend the Constitution against “enemies foreign and domestic.” 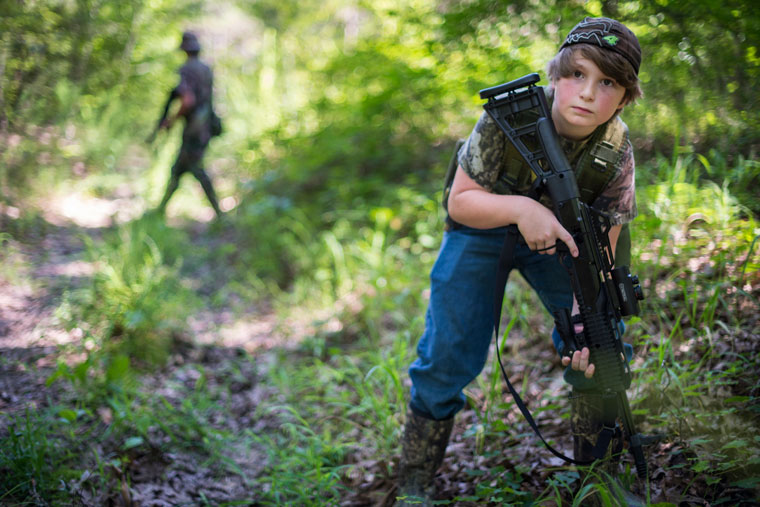 Dalton Davis, 10, participates in a patrol drill in the woods of Batesville, Miss., with the Citizens Militia of Mississippi. Photo by Jim Tuttle/News21.

“It’s supposed to be your neighbors and your friends and your family, working together to better the community,” said Doug Jones, the militia’s co-founder who also serves as treasurer and second-in-command. “That’s really what a militia is.”

Active members typically do field training one day a month. That includes drills to practice patrolling and live-fire target practice, as well as learning about first aid, compass navigation and outdoor survival skills. Mitchell says their exercises are largely focused on team building, much like basic training for new military recruits.

Much of their activity focuses on the community. Mitchell said the group holds regular open meetings at the local public library and helps raise money for local police and firefighters.

“We can see ourselves making a difference in our community and in our state. It hasn’t been easy,” Mitchell said. “It’s not going to get easier, but we’re going to keep doing it because we can see that result.”

While he says he wishes the militia were his full-time job, Mitchell makes his living as a machine operator at Batesville Casket Co. He said most of his remaining time is occupied by CMM business.

“My kids hate it, my ex-wife hates it, my now ex-girlfriend hates it. Everybody in my personal life pretty much hates it, because it consumes all my time,” Mitchell said. “It’s what I live to do. I’m one of those ‘all or nothing’ kind of guys, and I’ve put it all in this.”

Mitchell considers the Second Amendment a priority in his life, one that requires sacrifice.

“If you want to get technical about it, every gun law on the books is unconstitutional. I’m not saying give lunatics guns. There have to be limits. Anybody with common sense knows that,” Mitchell said. “The problem is, the more you let them infringe on your right, the more they’re going to. I’m not willing to let them have any of mine.”

Charles Heller is the co-founder of the Arizona Citizens Defense League and spokesman for Jews for the Preservation of Firearms Ownership, a national organization that aims to “destroy gun control.”

The group was formed to spread awareness “about the historical evils that Jews have suffered when they have been disarmed.” Twenty-five years later, that mission has expanded. 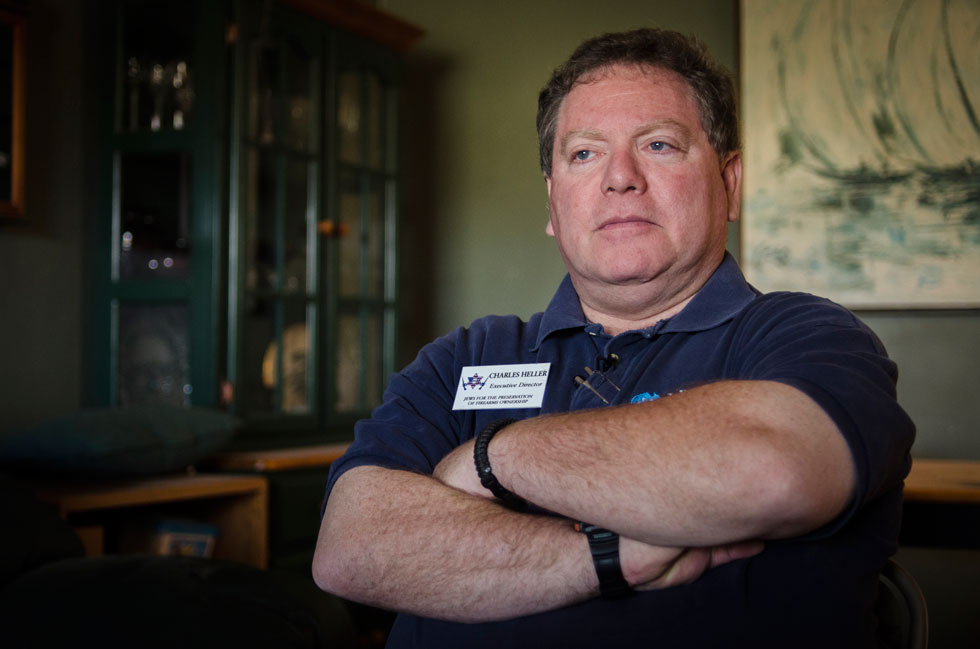 Charles Heller, a spokesman for Jews for the Preservation of Firearms Ownership, talks about gun rights at his home in Tucson, Ariz. Photo by Jim Tuttle/News21.

Many gun rights supporters believe that the uninfringed ability to keep and carry guns is necessary to protect all other rights in the Constitution.

Reynolds is stockpiling food, medical supplies, guns and ammunition for a time when American society collapses. He said such an event happening is “not a matter of if, but when.”

People who share these beliefs are preparing throughout the country. A majority of states have at least one established militia group.

In Alaska, militias from across the state have gathered annually for the past three years for a weekend Prepper, Survivalist and Militia Rendezvous just north of Anchorage. The public is invited to come out for “free training provided by patriots.” Topics on the training schedule include close-quarter tactics, base defense, camouflage and convoy security.

The Southeast Michigan Volunteer Militia marks its 20th anniversary this year. The group trains every month to prepare for “disasters, crime, invasion, terrorism and tyranny.”

This year, its training calendar included topics like winter survival exercises, shotgun and gas mask drills, as well as patrolling in various conditions.