Across the country, a thriving dissatisfaction with the U.S. government is prompting a growing spate of bills in state legislatures aimed at defying federal control over firearms - more than 200 during the last decade, a News21 investigation found.

Particularly in Western and Southern states, where individual liberty intersects with increasing skepticism among gun owners, firearms are a political vehicle in efforts to ensure states’ rights and void U.S. gun laws within their borders. State legislators are attempting to declare that only they have the right to interpret the Second Amendment, a movement that recalls the anti-federal spirit of the Civil War and civil-rights eras.

“I think the president and the majority of Congress, both in the House and Senate, are just completely out of touch with how people feel about Second Amendment rights,” said Missouri state Sen. Brian Nieves, who has fought for bills to weaken the federal government’s authority over firearms in his state.

In Idaho, the Legislature unanimously passed a law to keep any future federal gun measures from being enforced in the state. In Kansas, a law passed last year says federal regulation doesn’t apply to guns manufactured in the state. Wyoming, South Dakota and Arizona have had laws protecting “firearms freedom” from the U.S. government since 2010.

A News21 analysis shows 14 such bills were passed by legislators in 11 states, mainly in Western states, along with Kansas, Tennessee and Alaska. Of those, 11 were signed into law, though one was later struck down in court. In Montana, Missouri and Oklahoma, three others were vetoed.

More than three-quarters of U.S. states have proposed nullification laws since 2008. More than half of those bills have come in the last two years after the shooting at Sandy Hook Elementary School in Newtown, Connecticut. All but three have been introduced since President Barack Obama took office.

Underneath the policy jargon lies a culture of firearms woven into the heritage and politics of states whose histories were shaped by guns.

“(The federal government) is diving off into areas unchecked that they’re not supposed to be involved in,” said Montana state Rep. Krayton Kerns, who introduced a bill in 2013 to limit the ability of local police to help enforce federal laws. “Not only is it our right in state legislatures to do this, it’s our obligation to do it. Somebody’s got to put a ‘whoa’ on it.”

The Brady Center to Prevent Gun Violence filed a lawsuit against Kansas on July 9 to stop enforcement of the state’s recently passed Second Amendment Protection Act.

“The law should not be called the Second Amendment Protection Act, it should be called the Gun Violence Preservation Act,” said Jonathan Lowy, director of the center’s Legal Action Project.

Two types of bills are the primary vehicles for the movement, both based on model legislation introduced in statehouses from Tallahassee to Juneau.

The first type holds that federal laws do not apply to firearms manufactured and sold within a given state, relying on the Constitution’s interstate commerce clause. It says Congress can regulate trade between states, but says nothing about trade within states.

Under Utah law, for example, guns made, purchased and used in the state are exempt from federal laws. Commonly known as the Firearms Freedom Act, versions of the law have been debated during 78 legislative sessions across 37 states in the last decade.

The other approach says gun regulation falls outside the scope of the federal government’s power, making it state territory. Such bills, often known as the Second Amendment Preservation Act, usually say state officials cannot enforce federal gun laws or limit the ability to do so, and some bills have tried to impose penalties on officers who help federal officials.

Montana lawmakers and citizens have led the nation in crafting legislation that would make it difficult for federal gun laws to be enforced in the state.

“It’s basically saying, ‘Federal government, if you want to enforce federal firearms laws in the state of Arizona, you’re welcome to do it, but we won’t give you any assistance. So in other words, no state police help with (Bureau of Alcohol, Tobacco, Firearms and Explosives) raids, no local law enforcement enforcing a federal gun law, none of that,” said Mike Maharrey, national communications director of the Tenth Amendment Center, a for-profit nullification group based in California.

The Kansas law makes it a felony for federal officials to enforce U.S. firearm law.

The Brady Center suit against the Sunflower State indicates that some are beginning to view nullification as a threat.

“This is a matter both of constitutional law and common sense,” said Stuart Plunkett, a Brady Center attorney in that case. “Our system of laws would break down if each of the 50 states could offer its own interpretation of congressional authority over interstate commerce.”

But the bill’s sponsor and co-author, Republican Rep. John Rubin, said he believes it’s the Brady Center that errs in interpretation of government authority regarding intrastate commerce. Rubin, who spent much of his professional career as a government lawyer and in administrative law thinks U.S. government overreach is the problem.

The Tenth Amendment Center responded to the Brady Center suit with a pledge to ramp up its campaign to pass Second Amendment Preservation Acts in more states in 2015.

“To us, this is a BIG green light to push harder than ever to protect the 2nd Amendment through state level resistance to federal gun-control measures,” Tenth Amendment Center founder Michael Boldin wrote in a July 9 statement.

In Kentucky, Rep. Diane St. Onge has already introduced a nullification bill for the 2015 session. Although she’s sure a court challenge will come from the federal government if the bill is passed, she believes it will hold up.

“We’re making a statement here about what we hold true, what we believe in here in Kentucky,” St. Onge said.

The federal government has said little on the matter, but U.S. Attorney General Eric Holder rebuked Kansas for its law in April.

“In purporting to override federal law and to criminalize the official acts of federal officers, (Kansas’ law) directly conflicts with federal law and is therefore unconstitutional,” Holder wrote in a letter to Kansas Gov. Sam Brownback.

“I think that is a misguided distraction,” said Todd Rathner, an NRA board member from Arizona. “I empathize with what they’re trying to accomplish, but I am not convinced it’s the right way to do it.”

In Montana, where the largely rural population is spread out over nearly 150,000 square miles of mountains, fields and valleys, one man has been pushing these bills since 2005.

Gary Marbut, president of the Montana Shooting Sports Association, has written scores of gun bills that have been introduced since 1985 in the Montana statehouse, 64 of which have become law.

Marbut lives on his family’s old ranch, in a secluded geodesic dome near Missoula. A self-appointed guardian of state gun rights, he has failed in three bids for a seat in the Montana Legislature, but succeeded in starting a movement to weaken federal authority of guns across the country.

Marbut, who is running for state representative in 2014, didn’t expect other states to take up the cause. When it comes to the gun bills that challenge federal law, Marbut’s focus on guns seems almost incidental.His true target is challenging federal authority.

“I would like to see some of this power shifted back from governments, especially the federal government, to the states and to the people,” Marbut said in his home on an overcast morning in June.

This view appears to be shared by Montanans. The pioneer spirit that brought their ancestors to the West still runs throughout Montana and neighboring states. That independence, locals say, is what influences their views on guns.

“There is kind of a ‘leave me alone to live my life’ attitude in the state,” said Jim Smith, mayor of Helena, the state capital. “There’s only a million of us here and there’s vast acreage, six people per square mile.”

For Democrats and Republicans alike, guns are part of a time-honored and highly practical way of life.

Gun use is tied to family traditions: Firearm skills are passed down from parent to child. Elk hunts are social gatherings, gun safety is taught to 11-year-olds.

It was here that the first Firearm Freedoms Act, written by Marbut, was introduced. After three attempts in the Legislature, it passed in 2009. Its spark lit a nationwide fervor among those who want the federal government to get out of their lives.

“I designed it as a way to test federal commerce-clause power using firearms as the vehicle for the exercise,” Marbut said. The law said that guns made in Montana are not subject to federal law.

Almost immediately after its passage, Marbut announced he would manufacture a Montana-made rifle, but he was challenged by the Bureau of Alcohol, Tobacco, Firearms and Explosives, so he sued for his right to make the guns.

Eventually, the suit made it to the 9th U.S. Circuit Court of Appeals, which ruled against Marbut. He tried to take the case to the Supreme Court, but it declined to hear the case earlier this year.

This libertarian streak, coupled with a deep-seated appreciation of the Second Amendment, is at the heart of the expanding national movement to nullify federal law.

“We could be arguing over crescent wrenches if they wanted to make that the debate,” said Kerns, the state representative from Laurel, Montana. 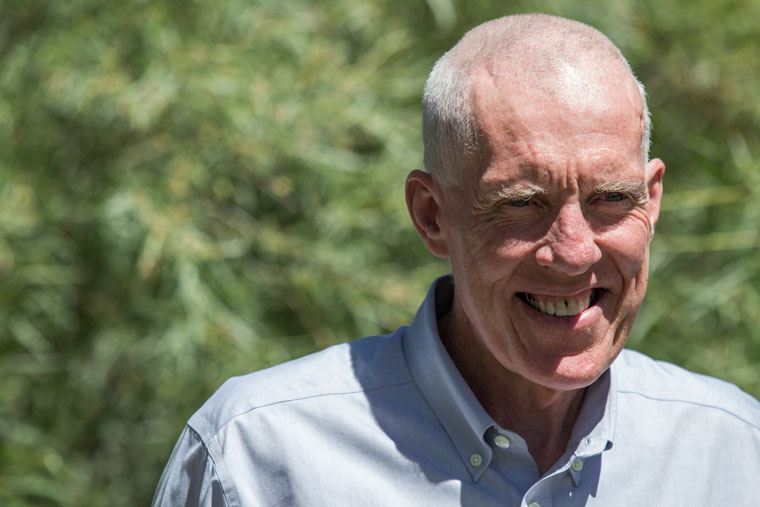 Montana state Rep. Krayton Kerns, the sponsor of a bill that would prohibit state officers from enforcing federal gun laws, leans against the fence at his ranch in Laurel, Mont. Photo by Justine McDaniel/News21.

“It just boils down to the federal government stepping across a boundary that they shouldn’t.”

One of the major forces behind these bills isn’t even a gun rights group.

The Tenth Amendment Center, which created the model firearms legislation known as the Second Amendment Preservation Act, is actually focused on the Tenth Amendment, which says any powers not granted to the federal government by the Constitution belong to the states.

“The kind of motto of our organization is, follow the Constitution every time, no exceptions, no excuses,” Maharrey said. “So we focus on any constitutional issue and try to limit federal power to its constitutionally delegated role.”

However, others say nullification efforts will not stand up in court.

Adam Winkler, a law professor at the University of California, Los Angeles, said that both types of nullification laws are unconstitutional.

“Nullification is no more valid today than it was during the 1950s during desegregation or during the pre-Civil War era,” Brady Center attorney Plunkett said.

But constitutional conservatives aren’t giving up.

Of the more than 200 bills introduced in the last decade, 130 have come in the two years since the Newtown shooting, a time of renewed advocacy for gun control legislation by Congress.With federal gun laws staying in the news and the nullification trend spreading, many gun rights advocates continue pushing to void U.S. law.

If the fight continues, it has the potential to have a broad effect on states’ rights. Although nullification is a recurrent challenge to the federal government, it rarely succeeds.

What seems like a purely pro-gun trend speaks to a deeper dissatisfaction among a large swath of Americans and a desire to spurn the federal government in today’s highly polarized political times.

“I think it’s part of a larger interest in pushing back against federal power,” said Maharrey.

“I think the gun debate’s become more pronounced over the last couple of years due to some of the tragedies that we’ve seen, but on the other hand, interest in general of re-establishing state sovereignty and limiting federal power … has also grown,” he said.